Start a Wiki
When a strange meteor lands on a car in front of a botch, mugging several gang members (Dennis, Pest, Jerome, Biggz and Moses, the leader of the group), moses tries to steel the valuables from the car, but is attacked by a small creature, which the gang then kill and hope to use it to become rich and famous.

They then see more of the meteorites fall down from the sky and decide to investigate, but find that these creatures are larger and have glowing fangs and claws. The creatures chase the group, which is split up when Moses is arrested and locked in a police van. The two policemen are then killed by the creatures, letting Moses escape unharmed.

Later, Hi-Hatz, the local drug boss, is hunting Moses and his friends when the hijacked police van crashes into Hi-Hatz's car. Angrily, Hi-Hatz and his bodyguard attack the group, but one of the aliens comes out of the dark and rips out Hi-Hatz's bodyguard's throat. The group then get attacked in one of their friend's apartment, the creatures attacks and kills Dennis. The group is then thrown out of the apartment and chased. Jerome gets lost and is killed by the creatures. It turns out that the creatures became aggressive for the females' hormone which is why the creatures attack everyone Moses has touched.

Later, Hi-Hatz finally finds them, but several creatures break through the window and devour Hi-Hatz. The group all run out of the building with others who joined along the way, except Moses, who stays behind to destroy the creatures. Moses blows up Hi-Hatz's weed room, killing the creatures.

Moses lives by jumping from the broken window attached to a union jack flag. When the creatures are all dead, the police arrest him and pest, on suspicion of the murder of the two policemen, the Gazeres all start cheering Moses' name, causing him to smile.

The male aliens seem to resemble Bear's in general body shape, but when running, they move more like gorillas. They possess fluorescent blue teeth which can be partially seen when their mouth is closed, making them easy to mistake for eyes, of which they have none. Because of this, it seems that the aliens find their way by smell, as they are often seen sniffing the air in order to find their way around. The males also have extremely dark fur, which Pest describes as "the blackest black I've ever seen." 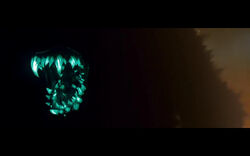 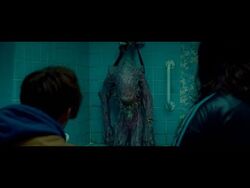 The female alien
Add a photo to this gallery
Retrieved from "https://monstermovies.fandom.com/wiki/Aliens_(Attack_the_Block)?oldid=44098"
Community content is available under CC-BY-SA unless otherwise noted.