Bruce (a.k.a. Jaws) is the titular main antagonist of the 1974 novel Jaws by Peter Benchley and the 1975 summer blockbuster film of the same name. He is nominated in AFI's 100 Years... 100 Heroes and Villains, 100 Heroes & Villains - American Film Institute, IGN's top 100 Villains.

He is a 25 foot, 6,000 pound great white shark that fed on Amity Island swimmers throughout the entire Jaws (1975) movie.

Bruce is a 25 foot, 3 plus ton great white shark that plays a similar role to his novel counterpart in the 1975 movie. At the start of the movie, Bruce is lurking through the Amity Island waters then attacks and eats a skinny dipping Chrissie Watkins.

He attacks a young boy (Alex Kintner) a few days later, making Chief of Police Brody to do something about it. Bruce goes on to eat Ben Gardner as Mrs. Kintner (Alex's mother) places a $3,000 bounty on Bruce. On the fourth of July weekend, Bruce enters a nearby estuary and kills a boater. Finally Brody with shark hunter Quint and oceanographer Matt Hooper go off to kill the shark. Like the novel, the first attempts to kill Bruce simply fail, but Quint is killed by Bruce and Hooper barely survives the shark by hiding among rocks on the ocean floor after trying to kill the shark in the shark cage.

Brody manages to kill Bruce by shoving an air tank into its mouth and shooting the tank making it blow up killing Bruce in the process.

The Ampullae of Lorenzini are special sensing organs called electroreceptors, forming a network of jelly-filled pores. They are mostly discussed as being found in cartilaginous fish (sharks, rays, and chimaeras); however, they are also reported to be found in Chondrostei such as reedfish and sturgeon. Lungfish have also been reported to have them. Teleosts have re-evolved a different type of electroreceptors. They were first described by Stefano Lorenzini in 1678.

The lateral line is a system of sense organs found in aquatic vertebrates, used to detect movement and vibration in the surrounding water. The sensory ability is achieved via modified epithelial cells, known as hair cells, which respond to displacement caused by motion and transduce these signals into electrical impulses via excitatory synapses. Lateral lines serve an important role in schooling behavior, predation, and orientation. For example, fish can use their lateral line system to follow the vortices produced by fleeing prey. Lateral lines are usually visible as faint lines running lengthwise down each side, from the vicinity of the gill covers to the base of the tail. In some species, the receptive organs of the lateral line have been modified to function as electroreceptors, which are organs used to detect electrical impulses, and as such, these systems remain closely linked. Most amphibian larvae and some fully aquatic adult amphibians possess mechanosensitive systems comparable to the lateral line.

Bruce was able to take down the Orca with ease, but how about the three barrels he was able to take and keep underwater? It took 1200 lbs of force to just submerge the barrels. The average estimated shark would not be able to hold the barrels under water, though it could temporarily submerge them. However Bruce keeps them underwater with ease and for a long period of time.

Bruce was also able to pierce holes in the side of the Orca with ease. The top speed of a great white shark is still a mystery, as it was always known to be 25 mph but it has recently been known as 35 mph, which is quite a difference in the water, so how hard would a 6,000+ pound great white shark swimming at 35 miles per hour hit?

How hard can Bruce really hit?

New studies have estimated at a 21 foot great white shark possessing a bite force of 4,000 psi (17,790 newtons) and it is unsure if Bruce has a stronger bite force while it is very likely.

Bruce has taken bullets and has shown no pain from them. He has also been able keep 3 barrels underwater, which would have been 1200 lbs of force to just submerge the barrels. The average estimated shark would not be able to hold the barrels under water, though it could temporarily submerge them. However Bruce keeps them underwater with ease and for a long period of time.

The Bite and Spit strategy proposed by McCosker may well characterize the normal predatory behavior of White Sharks when attacking particularly huge and powerful pinnipeds. The technique is executed by biting the victim, then leaving it to bleed out and eventually die. After the victim has died the White Shark would come back and consume the victim.

The Grab and Hold strategy is when a White Shark grabs hold of a victim, drag them down to the bottom, and swim along the bottom with them in their mouth. They continue with the biting, causing mortal damage, and drowning the at the same time.

The White Shark circles and bumps the victim before biting. Great whites are known to do this on occasion, referred to as a "test bite", in which the great white is attempting to identify what is being bitten. Repeated bites are not uncommon, depending on the reaction of the victim (thrashing or panicking may lead the shark to believe the victim is prey), and can be severe or fatal. Bump-and-bite attacks are not believed to be the result of mistaken identity.

The victim will not usually see the shark, and may sustain multiple deep bites. This kind of attack is often carried out with the intention of preying upon the victim. Sneak attacks are the most fatal kind of attacks and are not believed to be the result of mistaken identity.

Breaching is when the White Shark rockets itself out of the water catching prey.

Quint being devoured by Bruce 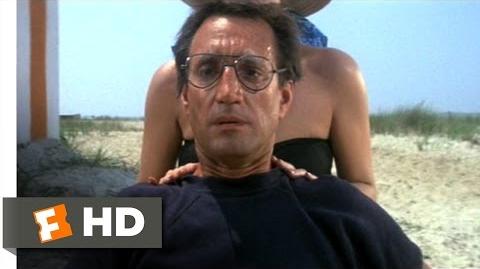 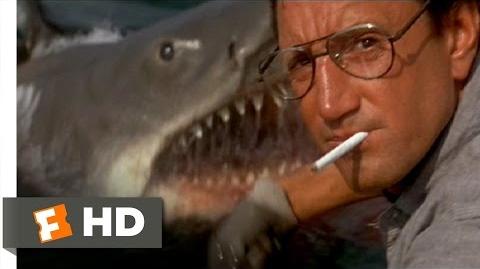 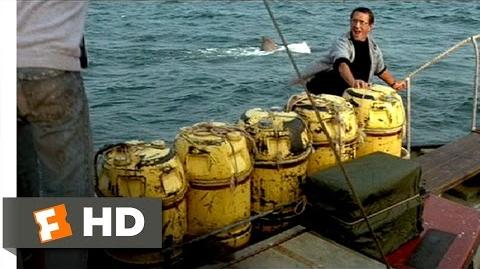 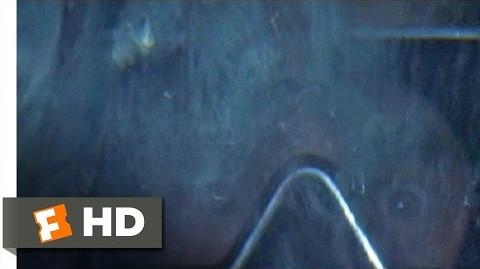 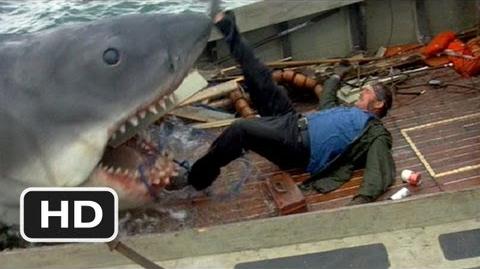 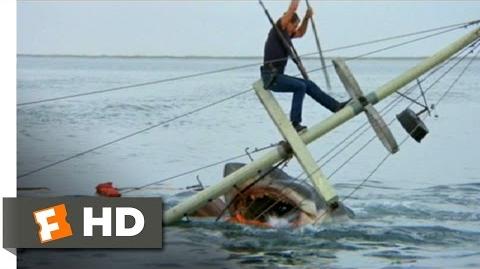