Spinosaurus
An adult male Tyrannosaurus rex appears as a minor antagonist in Jurassic Park III, the third installment in the Jurassic Park series and the first to not be based on a Michael Crichton novel. He fights the Spinosaurus, but gets ultimately defeated by it.

It has not been confirmed if this individual was one of the original 7, and later 6 Tyrannosaurus that were cloned by InGen scientists in their compound of Isla Sorna or if he was an offspring of a mated couple after.

It is possible that he was born before 1997 because of the Gene Guard Act enforcing the strict prohibition of further prehistoric animal cloning after the San Diego Incident that occurred that same year.

Role in the Film

During the 2001 Isla Sorna Incident, a 12-year old boy/dinosaur enthusiast named Eric Kirby was stranded in the island and collected Tyrannosaurus rex urine. However, it is unkown how did he collect T. rex urine.

After Dr. Alan Grant and the group (two of the members are Eric Kirby's parents, Paul and Amanda) manage to escape from a Spinosaurus, a bull Tyrannosaurus sees them while eating the carcass from a Parasaurolophus that was already dead. Grant tells the group to "not move a muscle", but after the rex roars, they run away from him.

Grant runs away from the rex too and he and the group come across the Spinosaurus again. While the others manage to find places to hide from these two theropods, Grant gets stuck in a ditch between two fallen logs as the T. rex and Spino fight. The bull T. rex starts biting the Spino's neck, but doesn't kill it and as he's about to win, he head-butts the Spinosaurus. This causes the Spinosaurus to bite his neck and break it, ultimately killing the supposed king of the dinosaurs while Grant manages to escape along with the others.

As the group leaves, the Spinosaurus triumphantly claims the bull Tyrannosaur's carcass by roaring. 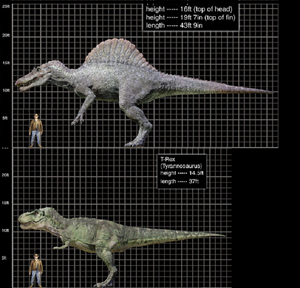 Size comparison between the Tyrannosaurus bull and the Spinosaurus from Jurassic Park III. 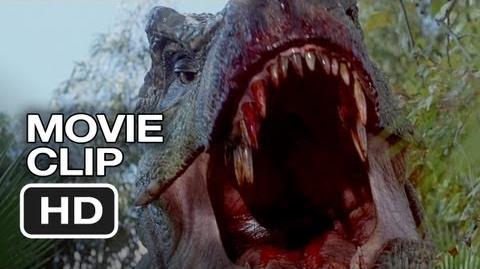