The Dilophosaurus was one of the largest Carnivorous Dinosaurs of the Jurassic period, were as in Jurassic Park the story is quite different.

Unlike their original counterparts, the cloned Dilophosaurus could spit venom at a range of 20 feet (6.1 meters) and would aim for the prey's eyes, causing blindness and allowing the Dilos to make their kill. Dr. Henry Wu noted that the genetic structures of the cloned Dilophosaurus were compatible with the DNA of Dendrobates leucomelas (Yellow-banded poison dart frog).

When Dennis Nedry is trying to flee the park after sabotaging it and stealing dinosaur embryos, he accidentally crashes his Jeep Wrangler vehicle and when he tried to get out of the car so he could go on foot, he trips and falls down a hill where he encounters a young Dilophosaurus. He finds it quite funny at first but he tries to get it to leave but it doesn't and instead spits a paralysing so he flees back to his car. The Dilophosaurus follows and gets in. It then eats Nedry.

After the events of Jurassic Park/Isla Nublar Incident of 1993, all of the five Dilophosaurus survived to 1994 at least.[1].

During the Isla Nublar Incident of 2015, Gray Mitchell, in order to escape the building along with his brother Zach Mitchell, as well as Claire Dearing and Owen Grady, shortly uses the holographic display of Dilophosaurus to distract the raptor named Delta. 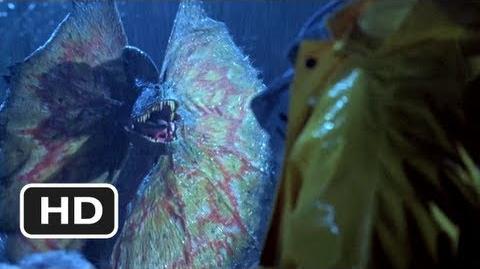