Gabara is the main antagonist from All Monsters Attack (known in North America as Godzilla's Revenge). In the film, he continuously tormented Minya. In the end when Godzilla gets tired, he just beats Gabara.

Gabara also appeared in an episode of Go Godman and was dispatched rather quickly. 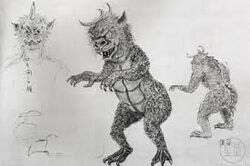 Add a photo to this gallery
Retrieved from "https://monstermovies.fandom.com/wiki/Gabara?oldid=49324"
Community content is available under CC-BY-SA unless otherwise noted.