Monster Moviepedia
Register
Don't have an account?
Sign In
Advertisement
in: Nightmare Before Christmas characters, Heroes, Disney monsters,
and 12 more

Jack Skellington is the main protagonist of Tim Burton's The Nightmare Before Christmas. He is the pumpkin king of Halloween Town, a world based on Halloween. He appears in skeleton form and dresses in a pin striped suit. He also has a dog called Zero and he is in love with a rag doll called Sally who was made by Dr. Finkelstein. Since he is a Skeleton, he can remove any of his bones without harming himself. He soon grows tired of Halloween and leaves his town in search of a new holiday to celebrate. He later finds Christmas town, a world based on Christmas which is run by Santa Claus. He then introduces Christmas to his town but it fails, Sally later helps him successfully launch Christmas and they are soon married and have five skeleton children. 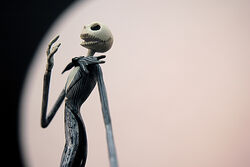