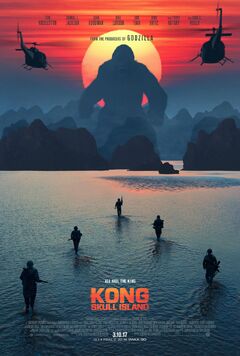 Principal photography began on October 19, 2015, in Hawaii. Kong: Skull Island premiered on February 28, 2017, in London and was released in the United States on March 10, 2017, in 2D, 3D, IMAX 3D and in Dolby Cinemas. The film was a critical and commercial success, grossing over $566 million worldwide against its $185 million budget, making it the ninth highest-grossing film of 2017.

In 1973, a secretive organization known as Monarch finds an island that is shrouded in mystery and identified as the origin for new species. The resulting expedition to the island reveals that a giant monstrous ape named Kong is at the center of a battle for dominion over the island, against the apex predators, nicknamed the "Skullcrawlers", responsible for wiping out his kind. As most of the expedition crew plans to fight for survival on the hostile island, some of them begin to see that Kong is wothy saving.

In the South pacific, 1944, the midst of World War II, An American soldier named Hank Marlow bails out of his damaged P-51 Mustang. He encounters a Japanese pilot named Gunpei Ikari on the beach. They both engage in a fight with a knife, but the fight is interrupted as a gigantic gorilla appears, Ikari drops the knife.

Arriving on Skull Island, Preston's men began dropping explosives developped by geologist to map out the island. However, the air unit is attacked by a 104 foot (31.6 meter) tall gorilla known as Kong, who kills a number of military personnel and scatters the survivors across the island. Packard regroups with some of the survivors, including his door gunner Reles, pilot Glenn Mills, Cole, Landsat program employee Steve Woodward. Preston confronts Randa, who reveals his affiliation to the secret government organization Monarch and the expedition's real purpose: to acquire proof of the existence of monsters and determine their threat to humanity. Preston and his remaining men bury their dead comrades and begin searching for the missing members of the expedition, including Preston's right-hand man, Major Jack Chapman. While trekking through the jungle, the men are attacked by a giant spider known as Mother Longlegs, killing one of them before Preston and his men shoot it to death.

Meanwhile, the other members (Conrad, Weaver, Brooks, biologist San Lin, soldier Reg Silvko and Landsat program employee Victor Nieves) encounter local Iwi natives and meet an older Hank Marlow, who reveals that Kong is the island's guardian, workshipped as a god by the natives for protecting the island's inhabitants from many apex predators, including reptillian creatures nicknamed the "Skullcrawlers". They are responsible for wiping out Kong's ancestors, leaving him as the last of his kind, and one killed Ikari. Marlow reveals Kong only attacked the helicopters to prevent the bombs from awakening the largest of the Skullcrawlers, the "Big One". "More to be added".

Retrieved from "https://monstermovies.fandom.com/wiki/Kong:_Skull_Island?oldid=41881"
Community content is available under CC-BY-SA unless otherwise noted.