Welcome to the Monster Moviepedia

If you like Aliens, Demons or any kind of Monster, you will love this site. This spectacular wiki has almost every monster you can think of. From Gremlins to Daleks to Pokemon. We have just about everything, but if we for some unknown reason have forgotten some ghost, goon, alien or any kind of monster, please feel free to edit!

(EXCEPT DALEKS AND EMPEROR PALPATINE)

"Why are Daleks not welcome? Clearly this is an act of blasphemy!! Although Emperor Palpatine should stay out." - Mr. Glasses 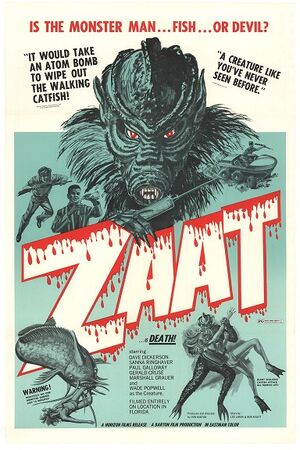 Its a new month, so now its time for a new goon to represent our beloved wiki! and that

new monster is the infamous Zaat or Swamp Monster! Florida's swamps were terrorized by this half fish half Nazi

hybrid seeking revenge on the other former Nazi scientists who rejected its plans to create an army of sea warriors. Zaat, also known as the Zaat monster, was the primary antagonist of the film Zaat or Attack of the Swamp Creatures. The Zaat monster was a former Nazi scientist, Dr. Kurt Leopold, who lived alone for about 20 years. He contemplates his former colleagues' derision for his "formula", which is described as "ZaAt" (read Z-sub-A, A-sub-T, but which he simply calls "Zaat"). This compound, it is later explained, can transform humans into sea creature hybrids and "mutate all sea life". He injects himself with the serum and immerses himself in a tank connected to an array of equipment of an unspecified nature, emerging as a furred, fish-like monster named after the serum.

1. If a category or monster does not have a picture it will be deleted if a picture is not added in 6 days.

2. No trolling or spam, if so i will feed you alive to the xenomorphs.

3. Anyone caught doing something innapropriate on this wiki will be sold to theBogeyman.

5. Do not recreate deleted Categories, Templates and Articles, without the permission of an admin

If any editor disobeys these rules will be exterminated!

REMEMBER TO THINK ONLY MONSTER THOUGHTS!

If you like this wiki, your sure to love this one too! Visit the All Movie Monsters Wiki!