Namegon is a massive slug-like monster that appeared in episode 4 of Ultra Q.

Originally appearing in episode 4 of Ultra Q, it was sent to earth by an unknown alien force from Mars. In a small gold egg. it was stolen by a pair of robbers who mistook it for gold. When the two had escaped to there hideout in a cave on a small island, the egg started to grow and Namegon hatched from the egg. After killing with its eye beams then he goes on a rampage around the island, it is lured to the top of a cliff by Ippei, where it tumble down in to saltwater ocean were he shrivels up and dies.

A second Namegon hatches from another egg that was being worn as a necklace by Yuriko. The necklace was thrown out of a window were it hatches and slowly crawls away.

Namegon has the appearence of a slug with a tentacle like mouth and large glowing eyes on eye stalks. Namegon moves very slowly and could shoot energy beams from its eyes. 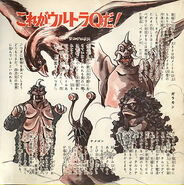