Start a Wiki
Ro-Man Extension XJ-2, better known as Ro-Man, was an evil alien that starred in the 1953 science fiction movie "Robot Monster".

Ro-Man was evil and deadly.

He attacked planet Earth and killed most of the Earth population with his Calcintion death ray. Soon he kills all the humans except eight survivors. With two gargantuan lizards at his disposle, he sets off to kill the survivors, but he is eventually killed in the end by his own death ray, but these events are later revealed to be just a small boy's dream. 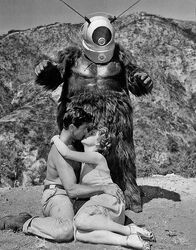 Ro-Man about to attack 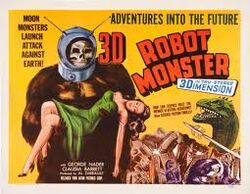 A poster of the film, with what it looks like. The Rhedosaurus is in the back.
Add a photo to this gallery
Retrieved from "https://monstermovies.fandom.com/wiki/Ro-Man?oldid=47606"
Community content is available under CC-BY-SA unless otherwise noted.