Start a Wiki
The Blob is the titular villain from the 1958 horror movie of the same name, and its 1988 remake. It is an alien entity who grows bigger by digesting humans. The Blob cannot be killed, it can only be stopped. The only way to stop the Blob is to freeze it.

The Blob comes from a small meteorite which falls on Earth. An old man finds it and pokes it using a piece of tree branch, making the meteorite crack and revealing the small blob inside. He pokes it again, but the thing climbs up to his hand, dissolving it. The old man is found by a couple, who take him to a doctor. Unfortunately, the blob dissolves the old man and the doctor, growing in proportion. The couple try to alert the police, to no avail. At the same time the blob is rampaging in the city, eating everyone in his path. The couple continue on trying to alert the populace, being heard only when the blob shows himself, now with gigantic proportions. While the police try to stop the thing with firearms, the couple find the thing's weakness when they use a fire extinguisher on him. The blob is frozen solid and blown up.

Some things changed aside from the characters, as now the blob is a result of a failed military experiment, using some virus and outer-space radiation. But the focus remained the same, the blob eating an entire city and growing bigger and bigger.

Nature of the Blob

The Blob is an amorphous, jelly-like creature who digests flesh on contact, assimilating it to grow bigger and bigger. Because it has no proper form, it can change it's shape and squeeze through narrow passages and openings. As it grows bigger, it can engulf and smash things under its weight. 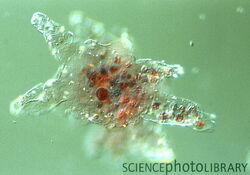 Amoeba, the inspiration for The Blob

Blob Attack
Add a photo to this gallery
Retrieved from "https://monstermovies.fandom.com/wiki/The_Blob?oldid=46525"
Community content is available under CC-BY-SA unless otherwise noted.