Zaat, also known as the Zaat monster, was the primary antagonist of the film Zaat or Attack of the Swamp Creatures. The Zaat monster was a former Nazi scientist, Dr. Kurt Leopold, who lived alone for about 20 years. He contemplates his former colleagues' derision for his "formula", which is described as "ZaAt" (read Z-sub-A, A-sub-T, but which he simply calls "Zaat"). This compound, it is later explained, can transform humans into sea creature hybrids and "mutate all sea life". He injects himself with the serum and immerses himself in a tank connected to an array of equipment of an unspecified nature, emerging as a furred, fish-like monster named after the serum.

His first act of revenge on the society that he feels has wronged him is to release several smaller walking catfish around the town's lakes and river (filmed in the St. Johns River near Green Cove Springs, Florida), an annoyance to the townspeople, and releases Zaat into the local water supply, rendering many of the townspeople ill.

Leopold decides to kill the colleagues that scoffed at his work. He begins with a character named Maxson. In a lake where Maxson is fishing, Leopold swims under Maxson's boat, overturns it, and proceeds to kill Maxson and Maxson's son. Maxson's wife escapes, although she is in shock from the attack.

After killing Maxson, Leopold discovers a girl who is camping out alone on the shore of the lake. He approaches her, only to be deterred by her barking dog. The girl carries on with her business, unconcerned about the barking dog. Leopold retreats. Later, Leopold kills another colleague, Ewing.

His two colleagues now deceased, Leopold returns to the lake where the girl is still camping and waits for an opportunity to abduct her. His perseverance pays off when she strips down to a yellow bikini to go swimming. She dives into the lake, swimming carefree until Leopold catches her underwater. He swims with her to his lab, even as she struggles in vain to escape.

At the lab, the bikini-clad girl is lying strapped down in a mesh basket next to the large tank of Zaat. She is unconscious, and Leopold reveals his intentions to make her his mate. Leopold injects Zaat into her neck. As she is immersed into a tank of Zaat, the girl wakes up and struggles against the ropes holding her. The equipment malfunctions for reasons unknown, and her corpse, partially transformed, is pulled from the tank.

Leopold attempts to kidnap another mate. His choice is Martha Walsh, the lovely female member of the INPIT scientific team sent to investigate the weird happenings in the town (caused by Dr. Leopold). Leopold grabs her after her male counterparts leave her alone. Leopold takes her to his lab, but two of her companions (having unraveled the plot) are waiting there. Leopold kills them (including the sheriff) violently. He injects her with Zaat, readies her to be dunked into the tank, and makes his getaway, with canisters of Zaat. Martha's transformation does not go as planned and she gets saved from getting dunked in the tank by one of her dying male companions as Leopold flees toward the ocean. Despite being saved from the transformation, she appears to be in a trance and immediately follows Leopold into the sea. The movie ends ambiguously, with Leopold seen shot but not killed. 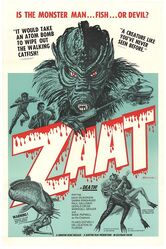 A poster for the film